Breeders of superior Border Collies for work and sport.

Diesel was a dog that you if you are lucky, you get once in a lifetime.  A dog that truly changes the course of your life. Diesel did that for me.  He was the beginning of everything.  He is the reason I fell in love with working and training border collies to work sheep.  He is the reason I own a flock of sheep now and raise lambs.  He is the reason I breed border collies and give lessons and began to run a kennel, and the reason that there are JLM dogs succeeding on the trial field, the agility field, in tracking and on ranches across North America.  Diesel was the beginning of it all.  He came to me in 2004 as a pup I bought from a little farm in Lumby.  At that time he was just an unregistered pup and I had no plans for him other than to be my companion.  I wanted to try sheep herding with him, as I had always wanted to learn how to work this breed properly.  My family had cattle and horses and always border collies, but never actually worked one to its potential.  I didn't know how.  We went for our first herding lesson when Diesel was nearly 3 years old.  In one lesson I was hooked!  We would travel to train and practice as much as we could, and I eventually bought my first 6 sheep.  Everything grew that moment on.  Diesel was so talented.  I tracked down his paperwork, got him registered, and as they say "the rest is history!"  Thank you Diesel for opening up such and adventure.  We will always miss you.

Marvin was a son of Diesel and Sky, born in 2007.  He was a difficult pup to handle.  Full of drive and grit he was a handful to say the least!  His talent became evident early however, and I started his training at a mere 6 months of age.  By 11 months I entered Marvin into his first sheep herding trial and he handled it similar to a dog far beyond his age, placing 2nd in a fairly big class!  He was truly a star in the making and by the young age of only 2 had already earned himself the title of B.C's Pro-Novice Stock dog of the Year.  Before the age of 3 years old Marvin was training for Open Field trials and was running out over 600 yards to find his sheep.  He was truly gifted.  It was just after Marvin's 3rd birthday that tragedy struck.  Marvin went lame.  Undetectable for the first 2 years, we had specialists of all kinds, numerous X-rays, ultrasounds, everything to try to find the source of this mysterious and worsening pain.  In June of 2013, Marvin very suddenly became struck with excruciating pain.  We sent him for an MRI and finally found the demon.  A growth had followed a nerve and had grown up under his shoulder blade and had entered into his spine.  There was nothing that we could do and on June 13th, 2013 we had no choice but to put him down.   Marvin was an incredibly talented sheep dog, but he was also a wonderful father, a member of our family, and my best friend.  He will be greatly missed, but I am so thankful that I was given the years we did spend together.  Marvin's legacy lives on in his son Harold. 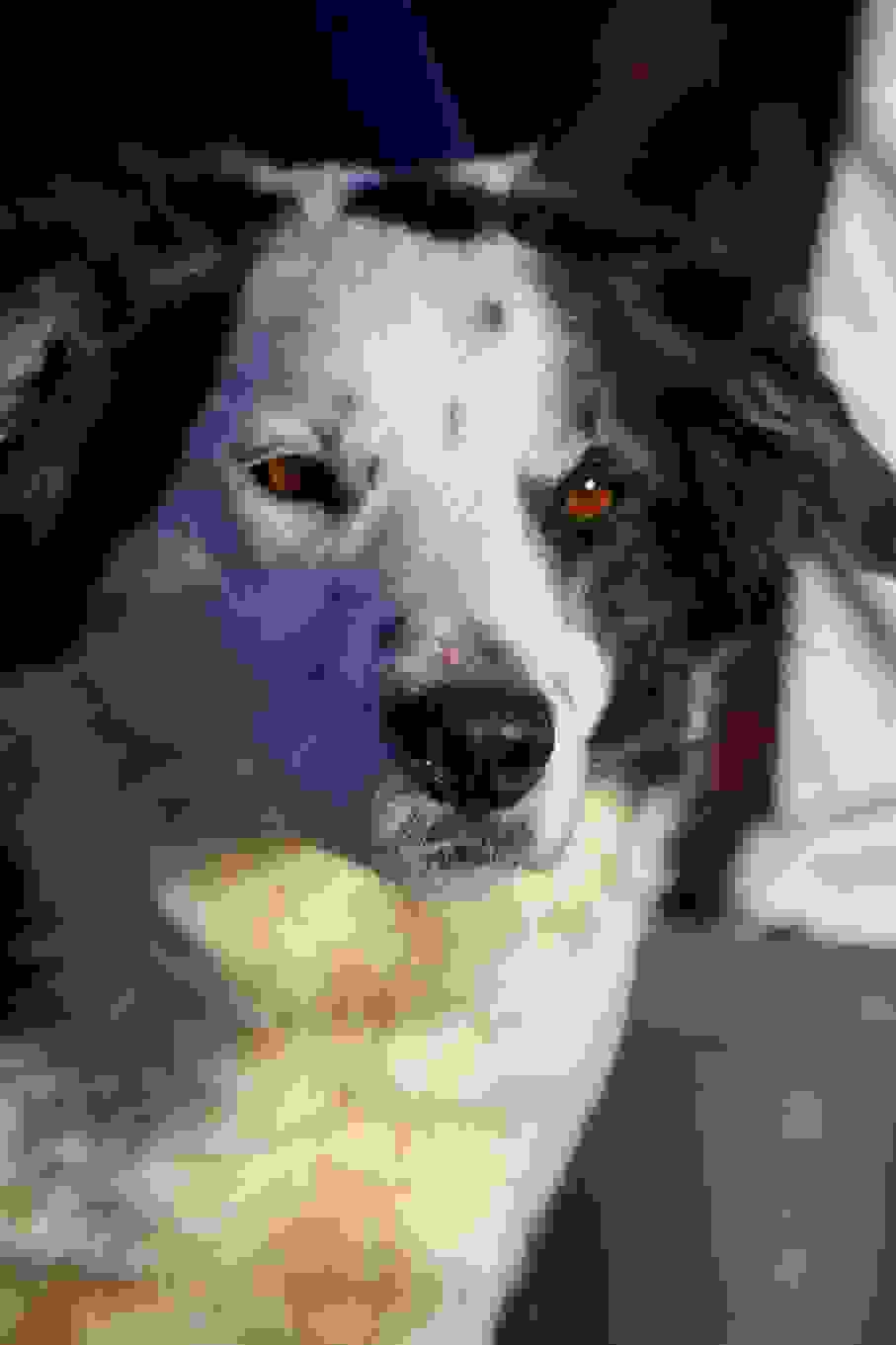 Chloe was born to Diesel and Sky, February 2nd, 2007. She was a litter-mate to Marvin. From the very beginning Chloe had the heart of a lion.  She was a difficult pup to start, preferring to use her teeth for everything!  It took Chloe until she was 2 years old to really allow me to rein her in and get her precise enough for trial work. But her strength was her ability for chore work. Any kind of chore work.  The tougher the better for her.  She could move any ewe, any cow. She did not know the meaning of "back-down."  Even though she was not an easy dog to trial, she still did well.  I was a Novice handler when Chloe was a pup and new to training dogs, and even with her head-strong personality, we still did well.  She was Novice Arena Champion, and BC's Reserve Arena Dog of the Year for Pro-Novice.  She won both runs and the Overall Champion at the Hope Brigade Days trial, and Chloe did well in her debute in Open Field, coming 5th at the tough Paxton Valley trial out of nearly 50 dogs.  Unfortunately Chloe's career was cut short when she ruptured ligaments in her front leg that caused permanent lameness.  Despite this she still remained my best dog for chore work at home, and a beloved family member.  Chloe was exceptional when it came to her love for children and was a wonderful dog for my nephew to play with.  Chloe was happy and healthy until she became suddenly ill October 15th, 2017.  Chloe was diagnosed with Lymphoma and tragically passed a week later on October 23rd. True to her nature Chloe was a fighter to the end, and I will miss her forever.  I hope that she is now re-united with her brother Marvin and they are looking down on their grand-niece/grand-daughter Eeva, who now carries on their line.